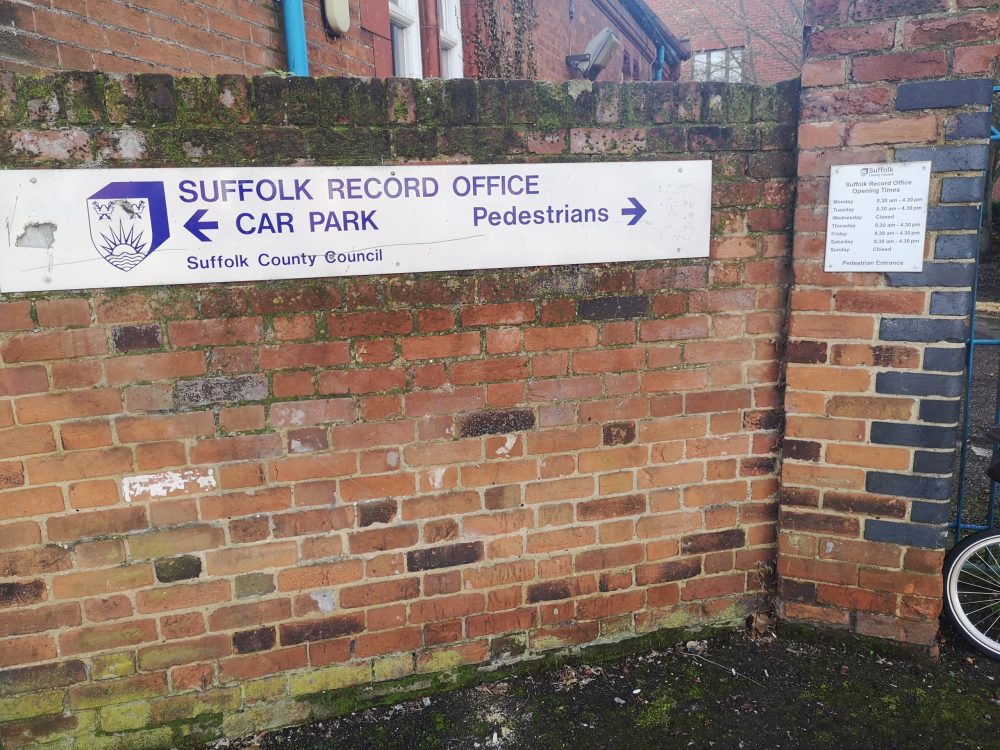 My visit to the wonderful Suffolk Record Office Archives at Ipswich was a special one. It represented the first research trip of my Leverhulme Trust Fellowship, which began on 1 February. On the following Monday I took a train from Cambridge to Ipswich and cycled from there to the archive. I have visited many archives and I think this might have been the best. It reminded me of the old Colindale newspaper library with its low ceiling, wooden tables and expert archivists to assist. The setting was so pleasingly out of its time that there was even a hot water urn for drinks. You could buy teabags or coffee sachets from the desk, fill a mug, and then sit with other researchers at tables just outside the reading room.  This archive was perfect for research, although a voice from the desk could interrupt.

I didn’t need to take any photographs, but to use a camera would cost £10 at Suffolk Archives. Although the archives at Kew and Sheffield don’t charge for photographs this policy was nothing to do with the librarians. Still, an older man remonstrated loudly with them. It was apparently terrible that he, a taxpayer, should pay to photograph materials. The complaint went on for several  minutes with the person at the desk patiently saying it was nothing to do with them. Amplifying his annoyance, the charge was now ‘Disgusting’! At this point an even older man ran to the desk to tell the man he was a ‘Disgrace’. Quick as a flash he was told he was very rude by the complainer. However it broke the rant. The complainer left and the challenger returned to his research. I could have spent every day researching there, but that is impossible.

The materials I consulted concern the setting up of the Ipswich Mechanics’ Institute. Dating from 1824, it was one of the first in the country. This institute was a place where members battled to assert their own interests rather than fully submit to some of the paternalistic, employer based interests of the governors. What is evident from the minute books is just how poor the Ipswich Institute was. For example the library would buy in a day-old copy of the Times. This second-hand copy was much sought after. Institute members had to write their names on a slate and were allowed only ten minutes of reading with a sand-timer. That practice at the Ipswich library made it into fiction in Matilda Betham-Edwards’s novel The White House by the Sea (1857).

Like many institutes Ipswich was strict on the kind of books that members were allowed to see. Initially, no history books or fiction were allowed in the library, only books that were deemed useful for the trades of its members. It took until 1831 before Shakespeare’s works were permitted in. As at the Sheffield Mechanics’ Institute, the works of Walter Scott were banned by the governors.  Undaunted, the minute books show that members lobbied for three years before being allowed Scott’s works in 1836. To celebrate, another member, obviously one better off than most, donated a bust of Scott to the library.

This fragment among the relicts of the Ipswich Institute points to an ever-present issue. Educational institutes often teach in response to the demands of employers rather than to the curiosity of their members. Paternalism, deciding what is right for those deemed to be lower-class, is a manifestation of narrowly focussing on the immediate and short term concerns of employers. They might have no idea or interest in their employees having a broad education. The noses of the hungry members at Ipswich pointed in directions that were far more interesting than just focussing on texts that related to their work.

Suffolk Record Office is now closed and not because of Covid 19. The Archives are to be relocated to a new place called ‘The Hold’. I hope that the expertise, conviviality and hot water urn all make it through to the new home. Thank you to the archivists for making me so welcome. I’ll miss that place. 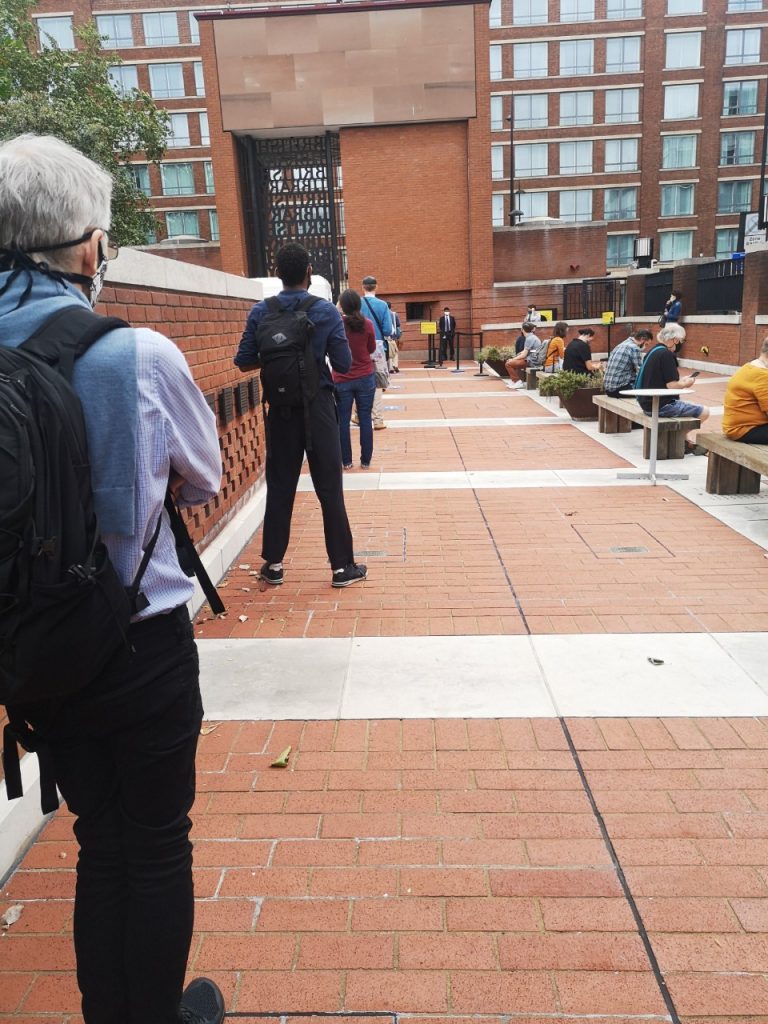 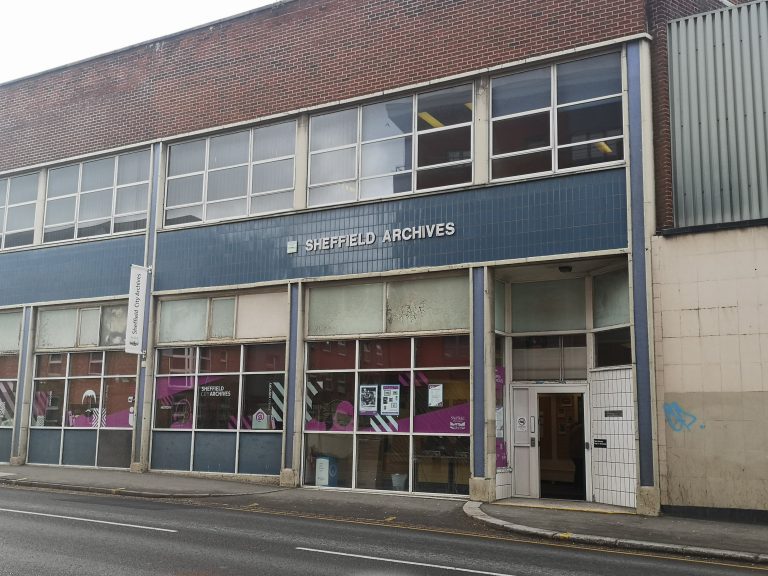 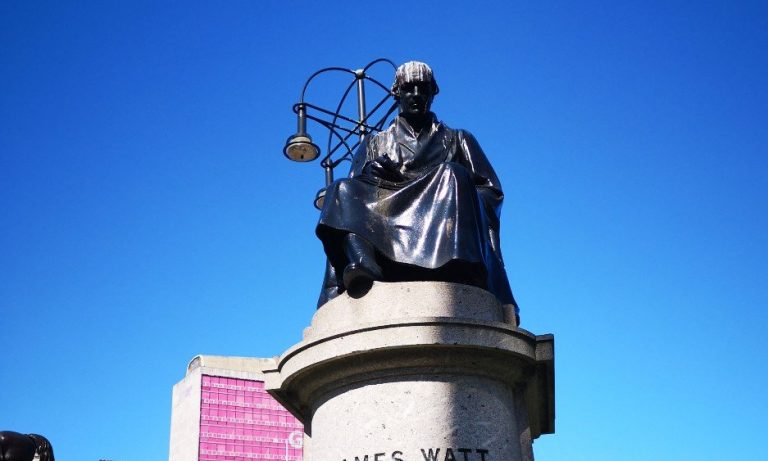